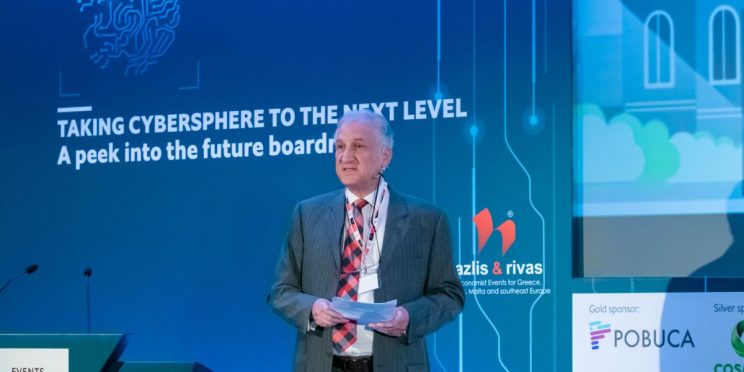 Applying the achievements of digital upgrading, from education to business, is at the heart of the Economist’s work on “TAKING CYBERSPHERE TO THE NEXT LEVEL: A peek into the future boardroom” held on Monday 18 March 2019 at the Grand Hyatt Hotel in Athens.

Improved communication and automated processes will be the main topics of the conference, which will focus primarily on the subject of cyber-security.

Mr. Ioannis Damianos (Founder, Chairman and CEO of Link Technologies) was one of the keynote speakers and briefed the audience, surpassing the 300 distinguished visitors, for the main subject of the company’s activity as well as its products.

Among other things, he referred to the IoT (Internet of Things), which encompasses our lives more than we imagine, as the majority of items we use everyday are most likely interconnected to IoT. According to Business Insider, the number of installed IoT devices will rise to 24 billion by 2020, while the size of the IoT market for the year we are in is estimated at $ 357 billion. The largest share of this market is attributable to the Smart Cities and Industrial Applications with Smart Homes and Smart Health following. The city of Barcelona is a model in smart city applications, and for several years is ranked first in the corresponding evaluations by providing various smart city applications. With the installation of special parking sensors and the implementation of a smart parking application the city of Barcelona has raised its revenue by more than 50 million a year, while the quality of the service has multiple benefits for both residents and tourists. Correspondingly, with the implementation of a remote lighting management system, the city of Barcelona saves 58 million euro a year. However, there are a number of similar examples in Thessaloniki as: Remote control of electric lighting- municipality of Menemeni, Water Telemetry- Municipality of Thermi, Waste Management- Municipality of Thessaloniki, Αccidents- Hellenic National Centre for Emergency Assistance.

The IoT has the potential to increase global productivity by up to 25% by 2025, which could be translated into an economic value of $ 11 trillion worldwide and $ 27.5 billion for Greece if technology is full deployment of the technology is achieved.

Skip back to main navigation